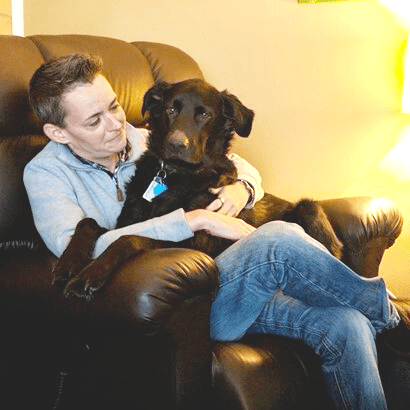 Life can push us through some very heavy doors that lead us to places that we never imagined we would find ourselves. To many of us who live day-in and day-out with trauma, it feels like an actual place that we long to come back from. When we survive the initial trauma, we aren’t just changed in our souls and minds, we can be changed in our bodies, too.

Post Traumatic Stress Disorder is a psychological disorder that can be caused by a multitude of trauma ranging from combat to natural disasters, to abuse, violence, and severe grief. There are countless ways the mind can be traumatized. In recent years, some have become more comfortable discussing the psychological challenges associated with the disorder. We feel a bit more empowered to discuss our traumas and triggers and talk about the routines we keep that help us to avoid episodes. We talk more freely about the anger we experience when those routines fail, and we become triggered. We are even starting to recognize the contagious nature of our hypervigilant protocols as we pass them on to our spouses and children.

An area that is seldom discussed are the physiological disorders that are caused by PTSD. Many of us aren’t aware of what PTSD is capable of doing to our bodies. I only began to understand the connection that PTSD has with our physiological health as I was diagnosed with moderate arthritis in my neck and hands about a year ago, at age 40.

How Too Much Cortisol Affects Our Body

Cortisol is known as the “Fight or Flight” hormone. During an emergency such as an accident or violent attack, the body produces this hormone which is meant to protect us. This hormone dulls our sense of pain, increases the body’s metabolism of glucose so we can draw strength, regulates blood pressure, and can reduce inflammation. The problem with Cortisol is that high levels of it will actually attack the body. A person living with PTSD is continuously producing this hormone.

Research has shown that over time Cortisol breaks down the bones leading to Osteoporosis and Osteoarthritis. In some cases, inflammation can become so severe that it can lead to Cushing’s syndrome. PTSD is also a high risk factor for Diabetes Type II, hypertension, memory loss, obesity, and a range of other conditions.

Too much Cortisol also inhibits the flow of oxygenated blood to the heart. This is significant because it is inflammation that inhibits blood-flow and poor circulation leads to a shedding of dead blood cells in the body, this shedding produces uric acid which also promotes inflammation. It is very easy for someone living with PTSD to be caught up in a vicious cycle of inflammation.

You Can Begin to Lower Your Cortisol Right Now

Researchers conducted a study on mothers of chronically ill children, as their stress levels were expected to be higher, and found that, “The hypothesis that mothers of chronically ill children with PTSD would exhibit significantly higher salivary cortisol levels than mothers without PTSD while waiting for their child’s medical appointment was supported. These findings are consistent with previous reports of higher cortisol levels during laboratory-induced, event-related stressors among those with PTSD.” Stoppelbein, (2012)

Lower your Cortisol levels by following some simple recommendations:

As a professional who has struggled with Complex PTSD for 22 years, I can promise you that you can still live a normal and meaningful life and reduce the symptoms associated with PTSD. With a proactive approach and full participation on your part, it can be a beautiful life.